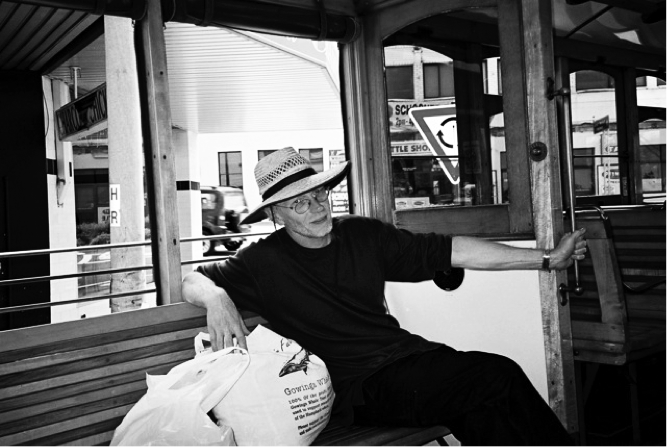 Photograph: Kerry Leves, on a tram in Katoomba 1993. Photographed by Jenni Nixon.

Kerry Leves was born in Balmain in 1948 to a First World War veteran. He was the author of Water Roars, Illusions Burn Vagabond Press, 2002, and other collections, and A Shrine To Lata Mangeshkar (Puncher and Wattman, 2007), a book named after the revered playback singer of over five thousand Indian films. The book was shortlisted for both the 2009 NSW Premiers Prize and Kenneth Slessor Poetry Prize. Kerry died surrounded by friends, books, sketches and thesis notes, on May 5th 2011 at the Sacred Heart Hospice in Darlinghurst, Sydney, of lung cancer.

For Peter Minter, Leves was a ‘man of great heart, spirit and intellect, and long-term friend and contributor to Overland.’

For Pam Brown, poetry editor at Overland, his work as reviewer and reader was open-minded and comprehensive. I was grateful for his support and critical review of my own work, and I still miss him a decade on since his death.

He was also the loyal partner of Jann Harry (see Nikki’s tribute) whom he  had met at a poetry workshop at Sydney University in ’69/70. It was there that they were energised by the excellent lecturers, chiefly Don Anderson and  Jim Tulip’s lectures on contemporary American literature. Kerry and Jann became part of the burgeoning community of Sydney ‘New Poetry’ contributors and writers, the so-called Generation of ’68, a group that included Vicki Viidikas, Robert Adamson and John Tranter. In the early 80s he met Sydney poet and feminist activist Margaret Bradstock, convenor of Harbour City Poets, and they enjoyed a close friendship until his death.

For John Stephenson Kerry was a an accomplished writer of reviews, ‘succinct, appreciative and deft at critical dispatch.’ He was generous with his time, deeply philosophical, and multi-lingual.

It is clear that Kerry could belong to all the ‘factions’ in the Sydney poetry  scene at the time – the Sydney Uni/Newtown crowd, the Glebe crowd (Ken and Anna Couani, Joanne Burns, and others, and the Balmain group (Tranter, Roberts et al.) In later life he and Jann Harry enjoyed the peace and quiet of Katoomba, and were able to continue their mentoring of writers through the Varuna Writers residency. While able to discuss modern French theory and cinema, he was very much influenced by Hinduism and Buddhism, an interest he had developed after spending extended time in India. His travel companion at the time was the brilliant Vicki Viidikas, and his friend and fellow Sydney poet Jenni Nixon recalls a man who was ‘enthusiastic, critical, informed about everything and wouldn’t tolerate racism, sexism or petty bureaucracy.’ Joanne Burns also recalls meeting Kerry in India in early 1981. After a long dusty train journey to West Bengal  Burns remembers Kerry greeting her on the platform, ‘glowing and radiant with his blonde curls and beaming smile, bearing an aura of gold, and swathed in an aqua blue and gold threaded scarf.’

On return he taught English to foreign students and taught writing with prisoners. As an open bisexual Kerry also worked with the Sydney Mardi Gras and other events. His interest in spirituality could perfectly complement his awareness of the unbalanced and gendered structure of our culture.

Sometimes you have a book that travels with you.  A collection of poems which has secreted itself into a handbag or suitcase, a book you grab and keep chancing upon like a forgotten bus ticket floating at the bottom of a purse or wallet.  Kerry Leves’ A Shrine to Lata Mangeshkar has been my bus ticket for the past eight months…The collection is prefaced with a quote from Indian Poet Keki N. Daruwalla, ‘In an alien land, language itself turns brown and half-caste’, which I believe gestures towards the difficulty of processing and translating experiences of ‘elsewhere’ into language, into poems. Kristin Hannaford

Kerry could also write a beautiful essay and memoir about those writers he loved and was acutely aware of the myth-making tendencies of his time. Of Vicki Viidikas he writes

‘A writer has a life. Not all of it goes into the writing… Vicki lived a full life; she embraced experience, even flung herself into or out of experiences, but not in search of something to write about. Her living, like her writing, was guided by a commitment to going against the grain.

Such words attest to Kerry Leves’ own strengths as a person and as a writer, whose life and work embodied the best qualities of the Sydney poetry world, and whose untimely death came ‘too soon’.

Shoeless
I crawl like an ant
down a stony mountain path.

Mother, how long was I dead
with the 84 varieties of torment
canned, sealed, labelled, shelved
inside?

Indians have been awake for hours.
Embers & deserts smoulder.

Cows meander
under the sheer drop.

The sun
churns the river.

Kerry’s book A Shrine to Lata Mangeshkar is available for sale through Puncher & Wattmann.

Poetry Sydney acknowledges the Gadigal people of the Eora Nation,  the traditional owners of the land we live, create, meet and work.


The Poetry Sydney email Newsletter keeps you informed of events and notices in Sydney and New South Wales, Australia.